Arnab Bhattacharya is an Assistant Professor in the Finance and Control Group at IIM Calcutta. He is B.Tech. (Hons.) in Mechanical Engineering from IIT Kharagpur and MBA from IIM Ahmedabad. He has a Fellowship in Finance and Control Area from IIM Calcutta. Prior to joining IIM Calcutta, he was at IIM Indore as an Assistant Professor. Prior to joining academics, he has worked at UBS Securities as an Associate in the Investment Banking Division, and at Tata-Hitachi Construction Machinery as a Production Engineer in their Assembly Operations Unit.

On 17th April 2019, the Board of Directors of Mindtree Limited, an Indian publicly listed IT and outsourcing company, declared an interim dividend of 30% (Rs. 3 per share). The Board of Directors also announced a final dividend of 40% (Rs. 4 per share) for the financial year 2018 – 19, and a special dividend of 200% (Rs. 20 per share). Since the company had 164,214,041 shares outstanding, this meant that the company was in effect announcing to return INR 443 Crores of cash back to the shareholders. This amount was record high with respect to the recent dividend pay-out history of the company (Please see Table 1).

Interestingly, the share price did not move much in either direction in response to the record high dividend announcement. For example, the share price closed at INR 972.45 on 16th April, opened at INR 979 on 18th April (0.67% higher than previous close), and traded at an overall average price of INR 975.73 on that day (0.33% lower than opening price). However, the traded volume was much higher on that day (INR 2.2 Crores), almost twice the median traded volume of the stock in the last 52 weeks. So, how was the market interpreting the dividend announcement news? Was the abnormally high dividend pay-out being interpreted as a good news or a bad news for the stock?

A quick recap of the corporate finance textbook chapters would remind us of some of the theories related to dividend decisions, which suggest that managers usually remain reluctant to make changes in their dividend pay-out policies, which they feel might have to be reversed in the future. Usually, the managers try to ‘smoothen’ the dividend distributions, avoiding dividend cuts or unsustainable dividend increases in the process. Therefore, dividend changes usually follow shifts in long-run sustainable earnings, rather than transitory changes in earnings. As a result, there is higher information content in dividend changes, rather than dividend levels of fixed pay-out policy continuations. In other words, the signalling power of dividend changes related announcements is far stronger than dividend continuations related announcements. More specifically, markets usually interpret dividend cuts as bad news and react negatively to it, while significant dividend increases are interpreted as good news, and investors usually react favourably to such dividend increase announcements, as such dividend changes tend to indicate the investors about the managerial beliefs regarding future cash flows and earnings of the company. 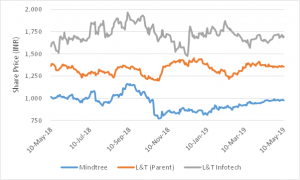 Why Did Mindtree Announce the Special Dividend?

Clearly, if Mindtree would have announced the 200% special dividend to signal the investors about the optimistic scenario of future cash flows and earnings potential of the company and the investors believed in the information signal, we should have expected the optimism to reflect in the share price in the form of an upward price correction. The absence of such an upward price movement tells us that either the story is different, or the listeners are not buying the story of the story-teller at its face value. In this regard, the opinion of the management of Mindtree (story-teller’s version) is that the special dividend is a way to celebrate the 20th anniversary of the company, and reward the shareholders in having reached an important milestone of US$ 1 billion in revenue in FY2019. But it is perhaps difficult to believe in this version of the story for more than one reason. And hence or otherwise, the investors and analysts have been looking out for other plausible reasons and rationale behind the generous dividend pay-out plan proposed by the management of Mindtree. We will have to wait for a while to know about the genuine motivation behind the special dividend pay-out plan, but we can certainly speculative our own versions as an outside spectator.

The Context of the L&T – Mindtree Hostile Takeover Bid

It is important to note that the special dividend announcement has been made at an important juncture, barely a month after L&T announced its plans to takeover Mindtree by acquiring 20.32% stake from Café Coffee Day founder Mr. V. G. Siddhartha, another 15% from the open market and subsequently, buying another 31% through an open offer. At an average acquisition price of INR 1,000 per share, this translates to a financial transaction costing L&T about INR 11,000 Crores. Since this is an ‘unsolicited open offer’ bid from L&T, Mindtree promoters are clearly opposed to the proposed deal which is being viewed as hostile by the Mindtree management. If successful, L&T’s Mindtree acquisition would become the first hostile takeover in the Indian IT industry. Therefore, it is reasonable to view the Mindtree special dividend announcement as a poison-pill manoeuvre to resist the unsolicited takeover bid by L&T. Hence, let us examine further, if there is any merit in this line of argument.

Note: Volume (x) indicates multiple of the median traded volume of the stock

What is a Poison Pill Manoeuvre? Insights from the M&A and Corporate Strategy Booklet

Poison pills commonly refer to popular defence mechanisms against hostile corporate takeover attempt, whereby certain corporate actions are taken by the management of the target company with an intention to make its own stock or business relatively less attractive to the potential acquirer, so that the same acquisition price appears relatively costlier once the poison pill strategy is implemented. Academicians are divided in their assessment of the overall impact of such poison pill strategies for the shareholders. Proponents argue that poison pill strategies help the board of directors to negotiate the best control premium for their shareholders in such hostile acquisitions. However, critics argue that such strategies may eventually make the hostile takeover too costly, in the process denying the shareholders their rightful gains from these control transactions. Moreover, such poison pills are supposedly often used by the management to entrench their own personal interests in retaining their control in the target company and maintaining their compensation benefits rather than being pursued with the genuine interest of shareholder wealth maximization. It may also be pertinent to ask if a special dividend announcement can be an effective poison pill strategy in the given context, irrespective of its net impact on the shareholder wealth.

There are a number of things that we may take into consideration in evaluating the net impact of the special dividend on the shareholder wealth as well as its effectiveness in reducing the chances of success of L&T hostile acquisition. First, the total dividend announcement (including the 200% special dividend) translates to an amount of INR 440 Crores to be distributed from the cash reserves of the company back to its shareholders. It is important to consider the effect of this cash outflow on the value of the firm, given its current investment plans and future growth aspirations. The dividend policy of Mindtree clearly states that the company will endeavour to maintain consistent dividend pay-outs to reward its shareholders, keeping in consideration the profitability and future cash flow needs of the business and its future growth and profitability outlook. Moreover, the dividend policy is expected to be in line with objectives of long-term shareholder value creation and sustainable corporate growth. The management of the company will clearly need to justify to its shareholders (and to the regulator in response to their recent query to L&T) that the special dividend announcement is indeed in line with their own stated dividend policy objectives, and is not detrimental to the long-term shareholder interests and sustainable corporate growth of the company.

Second, since the promoters own 13.3% stake in the company, they are expected to receive INR 59 Crores out of this declared dividend package. Hence, the promoters are also among the beneficiaries of this generous dividend distribution plan. However, this dividend proposal needs to be approved by the shareholders in an AGM scheduled in July. Hence, it is important that the management is also able to convince its non-promoters about the merit of this special dividend. Interestingly, if L&T ends up with 66.32% stake in Mindtree after the closing of the open offer, even L&T will be eligible to receive almost two-third portion of this generous dividend pay-out amount. Theoretically, L&T can re-invest this money back in Mindtree to undo the impact of this special dividend pay-out plan, although that is likely to be highly inefficient due to tax and transaction cost related reasons, besides other regulatory requirements.

Third, assuming the purpose of the special dividend plan is to resist the hostile takeover plan of L&T by increasing the transaction cost of the acquirer, the muted response of the investors to the special dividend announcement plan has clearly not been successful in raising the acquisition price of L&T. In other words, it is plausible that the investors have perhaps been wise enough to see through the nuances of this record dividend pay-out plan, and differentiate it from the signalling effect of a typical special dividend announcement by a corporate in the absence of any hostile takeover context. Fortunately or unfortunately, the added wisdom and the mature market response in this case is likely to improve the chances of success of the hostile takeover, depriving the Mindtree shareholders of an eventually higher capital gain resulting from the sale of shares to L&T at an even higher price in the scheduled open offer.

In summary, a special dividend announcement is often a reason for investors to cheer, when it also conveys the optimistic managerial beliefs about the future cash flows and earnings potential of the company. However, when the context of a hostile takeover bid is added in the backdrop of such a special dividend announcement, where the acquirer is trying to acquire a controlling stake in the target against the intent of the entrenched managers, the net impact of the dividend bonanza on the shareholder wealth of the target company is not necessarily always positive. The capital market regulator is fair in seeking additional clarifications from L&T regarding the policies of Mindtree, including its dividend policies, for a better understanding of the purpose of the generous dividend pay-out plan, and its eventual consequence for the Mindtree shareholders.