Recapitalization for Indian Banks: Will good banks be punished or rewarded?

Government of India announced the creation of a fund worth INR 2.11 lakh crore (INR 2110 billion) to be used for the recapitalization of Indian Public sector banks. This money would come from two broad sources: partly through a direct government contribution thus impacting the fiscal deficit and partly by issuance of bonds (in the form of zero-coupon bonds and other forms of bonds).

History repeats itself again with Life Insurance Corporation (LIC) expected to be roped into the recapitalization programme, but this time as a non-operating holding company (NOHC) where they would increase their stake in public sector banks (PSB) that are set to raise capital worth INR 580 billion through capital markets. Instances of banks raising capital with the help of LIC are: Recently, in 2017, State Bank of India raised INR 1500 billion through the QIP placement route with LIC as one of the largest participants (INR 580 billion or 38.6% of INR 1500 billion). In 2015, Bank of India issued preference shares worth INR 6.41 billion. Similar instances issuing preference shared to LIC as part of raising bank capital have been undertaken by UCO Bank, IDBI Bank, United Bank of India, Dena Bank and Indian Overseas Bank.

This is not the first time that the government is infusing capital in Indian banks or LIC is stepping up to subscribe to PSB share capital. But there are some important questions that come to the fore – they are:

From what one can understand based on the announcement of the Hon’ble Finance Minister on October 24, 2017, Government of India has not laid out any pre-requisite that is going to be followed in terms of the capital infusion process. By pre-requisite, we mean the basis of choosing the amount of infusion in a particular public – sector bank and bank selection based on a particular criteria?

What this could imply is that in case there is trouble at a particular PSB in terms of its ability to honour its commitments, the norms could be modified and capital will be infused to accommodate the bank, irrespective of its past performance records.

Is it the right thing to do?

For example, IDBI Bank faced trouble with the IDBI AT – 1[3] bonds interest payment, where RBI, as an exception, had allowed them to honour their commitment of interest payment through accessing the statutory reserves unlike the earlier norms of payment of coupons for AT – 1 bonds through profits generated in the current year or the accumulated profits. But will this exception become a norm in the Indian banking industry.

At a broader level, to some extent the RBI saved the AT – 1 bond market and ensured investor participation in the case of IDBI AT – 1 bonds. If IDBI bank had defaulted in the interest payment it would have provided a negative signal to investors and they would have potentially refrained from participating in AT – 1 bond issues of other banks. This would add an additional burden on the fiscal deficit as the entire portion of capital infusion would have to be government funded (using tax payers’ money). Thus, the government and RBI averted this issue by allowing Indian banks to use statutory reserves to pay off interest payments. This was a very prudent move on behalf of the RBI to maintain stability in the AT – 1 bonds market.

However, should this one-off practice become a regular one is a question that remains unanswered.

Moving onto the next question that arises with this capital infusion is:

Will bad banks be punished for their mismanagement of depositor funds?

Will the funds be deployed into good banks or bad banks? At this moment, there seems to be no clarity as to where and what will be the process followed for the disbursement of funds. According to us, the RBI should set a criterion for capital infusion process. Good banks should be granted a larger share of the funds so that they can help revive the banking industry lending, which was at an all-time low in the first half of 2017. A look at the (Incremental credit deposit ratio (ICDR) shows that it was at an all-time low of 26% in January 2017, which improved only slightly over the next few months. Another brewing concern is the declining domestic savings rate with financial corporations and household sector savings contribution reducing to 6.51% in 2015 – 16 from 8.23% (as a % of total savings) in 2014 – 15 and households from 62.03% to 59.33% (in 2014 – 15) – see graph below. A declining gross savings to GDP rate to 31% in 2015 – 16 would be a cause of worry as domestic savings are required to finance investments; absence of domestic investment would cause investments to entirely rely on foreign inflows thereby affecting the current account balance of India.

Given all of it, extending the recapitalization lifeline to the banking sector is essential for the revival of the economy – a very welcome move by the government. But there should also be accountability from the banks that should be built in to the process. A good bank, is the one that displays good operational ability, liquidity, capital capacity and generates a suitable level of profitability. An existing research on Operational ability, Profitability, Capital and liquidity and risk in Indian banking (Bawa. J and Basu. S, IIMB Review, under review) suggests that higher the operational ability, profitability and liquidity lower is the credit risk undertaken by Indian banks. Hence, this study suggests that banks who manage their operational, profit and liquidity side well tend to have lower Non-performing assets (NPA). We suggest that banks with a good operational, profit, liquidity side should be provided with a higher portion of funds from this capital infusion to give momentum to the lending cycle.

Banks that have poor/bad operational, liquidity and liquidity capacity should be provided with funds to an extent so that they can wipe off / reduce their NPAs from their balance sheet; but stringent monitoring conditions as well as severe penalties should be imposed in the future for rash lending.

At a first glance, the government has averted a crisis in the entire banking system through this capital infusion, a prudent move on their part. But, at the same time, they should ensure that these banks are held accountable to the tax payers and bond investors. The zero – coupon bonds will impose a very high liability on the future governments and thus the government needs to ensure that the costs thus incurred are for the good of the system – this is something that the current government owes it to its successors.

The capital infusion should not be treated like charity where at times the beneficiary (donor) is unaware as to where the funds are being used. Further, it should not be treated as an option which is always available – these are real extreme measures and they should thus be treated with the due importance and reverence that it deserves.

Indian Savings as % of total savings for the past 4 years: Household sector & Financial Corporations savings dips 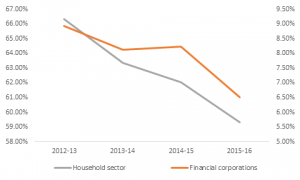 [3] Additional tier – 1 (AT1) securities and contingent convertible capital instruments, known as CoCo bonds, absorb losses when the capital of the issuing financial institution falls below a supervisor-determined level.

(This article was published in Economic Times on November 1, 2017)